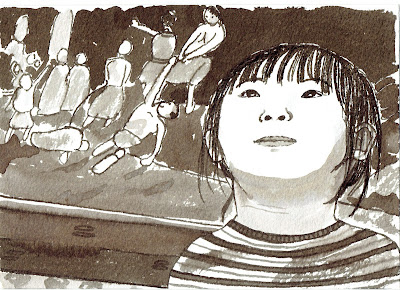 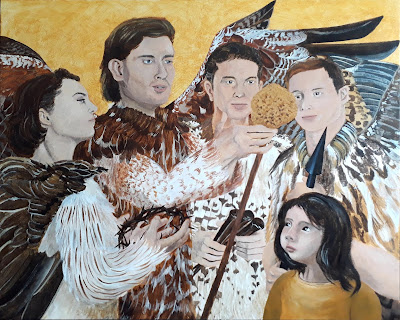 The latest post I read by Steven Pressfield said you should Keep Working because even if what you make doesn't make it to whatever it's supposed to make it to, it makes you what you are. >> Wow, okay that's vague, lol.

In my case, to reword what the gentleman said, I should keep painting (and drawing) because even if what I make doesn't make it to a show or get sold or whatever, it's what makes me an artist.

So here are a couple of things I've worked on recently that didn't make it ^o^;

The first is an ink drawing that I sent to a museum that (if I remember it right) was asking for things to post on their Instagram account ~ I picked one of their three themes and (if I remember it right, again) drew a kid seeing the Spoliarium for the first time. I was thinking about how the humongous painting would look a gazillion times larger to a small kid, and how big of an impression it would make on her ~ the kind that stays with you even after you grow up, and it's things like that that make museums so important (cos if you really think about it, museums are for kids ~ to save things for them for when they grow up, so they can pass em on to their kids someday).

Anyway the museum didn't take it ^o^; But I'm glad I did it because it allowed me to play around a little more with the pens I'd already been playing around with at the time.

And then there's the painting I made for what I was told would be the last ever Kristo. If you scroll through this jillablog (not the jillablog) you'll see I've been privileged to be able to participate in a few Kristo shows ~ not every piece I made for them was a magnum opus; as someone who paints monsters you'll understand how it was something of a challenge for me to make something that was on theme but still true to me, you know what I mean?

I was awed by having been asked, and saddened to hear that this would be the last show in what I regard as a very important series at a time when more and more people are turning away from God. I really super wanted to make something *nice* ~ and I'm afraid this was the best I could come up with at the time. I really, truly struggled with this (and I bet it shows) ~ the theme was "It is finished"; where I go to church they say it in Latin as "Consummatum est" (It is consummated) so that's what I ended up calling it.

It's meant to be a group of angels telling the story of the Passion to a small kid, and I was thinking of making the kid look super bored cos kids these days, they don't really appreciate, as much... I mean, as the generations pass, you know? (And in my old age I flatter myself thinking I belong to those recent generations of less appreciative x ungrateful kids.) ~ But in the end I couldn't bring myself to do it.

The sad thing is it was only when I was nearly done with it that I thought of something else I could've done for this show (and it was something I really, really, really wanted to do for the longest time, too) ~ but oh well, this was more in keeping with the theme, I felt, anyway. And I'd already completed this piece late ~ good thing they kept moving the deadline because of "the current situation", because of which, last I heard, chances are they may never hold this show at all, anymore, at least, not until the tail end of this year, by which time all the other things they had lined up will have accumulated and such...

Be that as it may I did what I could with it and I like to think I did my best, although deep down I know I could've done better. And now for sure I'll never get another Kristo to try again.

But again, I'm glad I did it because well, it's like Annlaw Clay-Shaper told Taran Wanderer~ the more you draw out the more remains, you know? And I'm grateful to God for giving me all these opportunities to *draw out* and *keep working* ^_^*