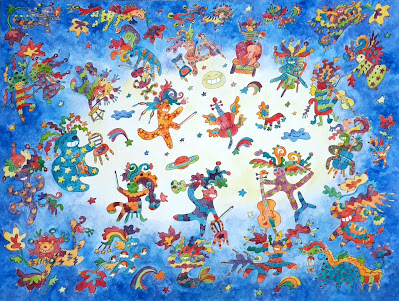 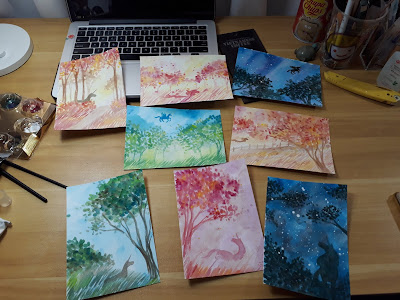 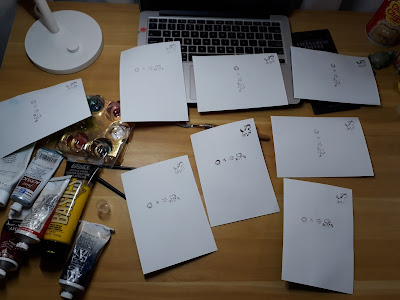 "You don't have to go home but you can't, stay, here~"
How do you leave some of the biggest supporters your practice has ever known? With difficulty. How do you make something as a small thank you for all all all their support? With (bittersweet) pleasure.
The dancing, cello and violin-playing bears I made because I was asked to. The horseys in the forests and fields, I made because I wanted to give my "one fan"-slash-the only person who EVER read anything I wrote, something that was *me* to say I really, truly appreciated it <3
It wasn't the eye-straining smallness of the details in the kumablobs (which were even smaller, I think than the llamablobs) that made the Musical Bears so difficult, or getting my ancient stamp pad to work for the reverse sides of the postcards, a pain. It was how it (like the Mellencamp song went) "hurt so good".
I really, truly wish that things were different and that I might've been able to hang on for just a liiiittle bit longer. It didn't make sense for me to leave people who've supported my art like no one else in my writing career ever had before. But as I was repeatedly told, it was never about friendship; it was just business ~ I owed nothing to anyone, and that anyone who stayed out of guilt or a sense of obligation wasn't welcome to stay.
Well, like the song goes, "Every new beginning comes from some other beginning's end". It's a year of new beginnings for me, not the least of which is how I'm starting a new chapter in my art career. I'm scared, yes, and still feeling my way around, but I'm also super looking forward to stuff with fresh hope that somehow, things are going to get better for me ~ and for those I've left behind ~ from here on out.
Posted by Jill Arwen Posadas at 04:21 No comments: