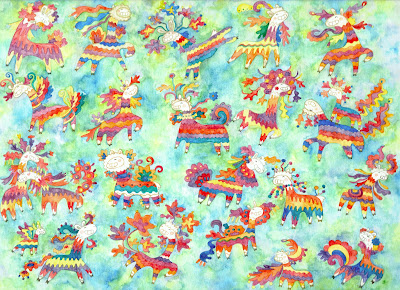 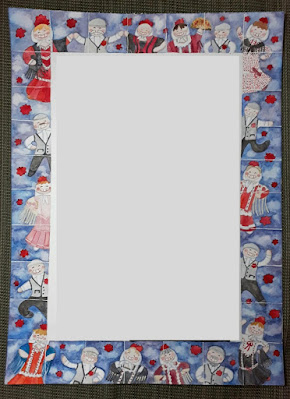 Yes, I did another border this year, but only after I did that small watercolour above it ^_^
Someone asked me to paint some llamas for their small nieces for Christmas this year ~ the someone was going to send the painting along with a personal letter for which I made one of those borders I seem to keep making, lately. Only this time, the border wasn't one of my usual "I didn't try so hard" and "I just wanted to have fun with it" ~ I put in the same level of effort I would've for any book illustration, which is to say, painting proper (although I'm told MoMA says anything on paper counts as a drawing even if you did paint it ^^;) ~
And I'm glad I did ~ I had SO MUCH FUN working on those llamas ~ and learned a lot about them, too: How many different kinds there are and how they're pretty much the equivalent of carabaos back here in the countries they come from, and how, like our beloved "Asian water buffalo", they also dress them up when it's time for a parade (although obviously, they don't paint the llamas like we do the carabaos back here o_o).
I have to say that in spite of its small size (the entire piece was about as big as A4 paper, when you know I'm used to having my blobs swim about on much bigger surface areas than that ~ and with my eyesight getting worse in my old age and the additional space I have at the new jillahouse, those surfaces are probably just going to get bigger ^___^) >> I did so much enjoy painting the llamablobs ~ I think they were the first I've done in a while (since I sort of switched to potatoes) and they did make me happy. Like eating your favourite candy again that you hadn't had in absolute donkeys because you don't seem to see the store that sells it, around, anymore. Makes me want to paint more blobs (or potatoes, at least, although they're not the same-same for... you know. *Freedom* and *spontaneity* ^^) again in the near future amongst the bazillions of other things I have perpetually lined up but can't seem to get around to actually painting.
But I did learn a thing or two about chulapos and chulapas ~ naturally (given my country was a Spanish colony and Catholic for hundreds of years) it wasn't *entirely* new or strange to me but sort of a "reverse remix" of what already goes down down here, especially for San Isidro Labrador (although "forgive me, but we all have patriotic feelings of some kind", I think we remixed it, um, *better* ^_____^ #pahiyas #higantes). But it was fascinating all the same, in a sort of "discovering your colonial roots" kind of way.
And as every commission, every art project, every painting is a learning experience, I did also learn or consider a few things about shipping overseas (especially during the "current situation") and how relationship-building is key when it comes to digital marketing (I do do what I do for a living, after all).
So it was my sheer pleasure to work on this project for someone whom it was my privilege, indeed to render my humble services as an artist. I think the LnC's will go down in jillahistory as one of my fondest art memories, ever and I am so very glad that these jillablobs were able to find a good good home <3
Posted by Jill Arwen Posadas at 14:20 No comments: