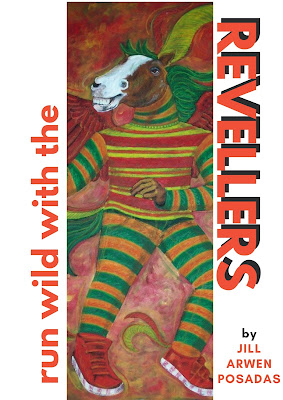 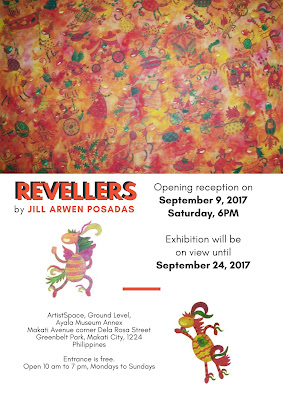 Revellers
Of Merrymaking and the Monsters who Make Merry

My exhibit last year was the fulfillment of an almost-forgotten dream to make a series of paintings depicting Philippine festivals. With Revellers, I wanted to take a closer look at local festivals, not just in themselves but also at some festival customs, as well as individual festivalgoers.

I wanted to focus particularly on individuals at the festivals because of the tendency to look at these events as a whole. Festivals are generally this great mass of people, many of whom dance en masse in the street in fancy costumes (or maybe they’re not costumes…), so it’s tough picking just one out of the crowd.

A Party in Himself

If you think about it, it’s individuals coming together that make a festival happen. What kind of person shows up at a festival? Why does he go? What makes him get out of bed—early, as like as not, to get things ready, get all dolled up, and get out there and party? Maybe this person has no real reason to celebrate; a frown would suit his circumstances better than a fiesta. But he puts his gameface on, anyway, and revels with the rest of them.

To me, that shows character, a sort of never-say-die spirit that, as Dumas puts it, chooses to “strike back at fate in retaliation for the blows they receive”, instead of “suffering and swallowing their tears at leisure”. It was this spirit that I hoped to discover beneath the feathers, sequins, and scales, and I figured that it makes more sense to celebrate this spirit with just one person in the picture instead of a whole town.

In celebrating the courage of this individual spirit, each person becomes a party in himself, and when you put all those individual parties together, you get one, big party, which is exactly what a festival is.

I prefer using the term “person” because of the general association of the term, “human” with the Homo sapiens physiology. I’ve always maintained that it is not the body that makes someone “human”; oftentimes, it’s the people who might appear more or less human who are more human than, well, humans.

Given the possibility that someone who might have blue fur or horns or a tail is also a person, this, to my mind, makes them not just fitting subjects for portraiture, but the subjects of a fantastic, parallel Philippines. I like to think this, “dimension”, if you will, either used to exist or co-exists with the one we live in, now.

And when I say “co-exist”, I don’t mean separately but concurrently—monsters (which is the quick and easy term I prefer to use for non-humans in spite of the term's general connotation) are all around us, I think. Most of us just can’t see them, is all. Maybe someday, we’ll all be able to; maybe we could, even now, if we opened our eyes and our minds wide enough.

Here are the 12 festivals and festival customs I’ve featured in this exhibit; see if you can identify the individual festivalgoers I’ve made portraits of in each of them.

> Just thought I'd share the original invite my sister made me, as well as my original exhibit notes, written in my own voice (if not 100% in my own words lol), explaining what this show's about and why I did what I did.

And now I want to say thank you, all in my words, to the people without whom this show would not have been possible:

On Earth: My mom. My dad. Mr Mon del Rosario, Mr Ed Chua. My sister. My sister's friends, who sat for me: Isab, Isobel, Krishna, Liz, David, Ivan, JP and Jum (sorry, guys, did my best ^^; ). Daylin, for her unwavering support. Ella for sitting for me, too. My cousin Ands for letting me paint my fairy godchild, Allegra. Sir Vincent. Sir Hendry. Mr Jon for knowing what I was up to outside of office hours but allowing me to get up to it, anyway. Fi and Celine. Rhea. Jovan and Mariel for coming through at crunch time. Fr Saa and Fr Peter Fortin. Jones. And to Mr Mark Shellshear of Galeria de las Islas for his kindness.

Previews will be up shortly at jill-arwen-posadas.weebly.com. And I will be out shortly ~ for how long (for real, this time?), I don't know. But one thing's for sure ~ I will never run out of thanks, or things I want to paint. I just need to rest a little, maybe and do a little thinking.

Posted by Jill Arwen Posadas at 02:30 No comments: