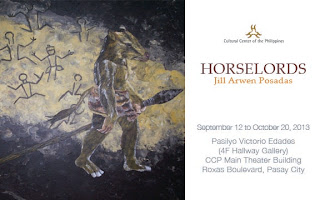 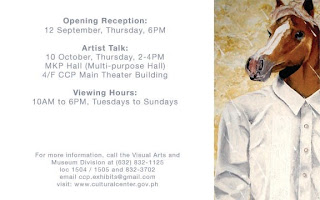 OF HORSES AND MEN
THE TIKBALANG :  HOMO EQUUS
MONSTROUS MAN

Has Jill Arwen Posadas ever encountered a Tikbalang? The answer is most assuredly Yes. Having always lived in a landscape peopled by monsters/ monstered by people, it was but natural that she should be quite taken by the nobility and grace of the Tikbalang. Man and Horse, creatures both, have evolved, as we understand them, each into his own race. But never once have we, in our limited capacities, considered that Man and Horse should both belong to the same lineage. Indeed, this melding of equine limb and human sinew, of the elemental and the earthly – would make for an Abnormis Sapiens, a savant of creation, unsurpassed in any reality.

Tikbalang : A Myth? Jill Arwen Posadas now makes a statement that Tikbalangs are real and that they do exist in our midst, that they have endured through human centuries and through their own parallel eons. Not as Myth but as Legend does the Tikbalang come down to us through the ages. Far from being some figment of forest lore, it roams the entire breadth and height of the human footprint : our cities and our woodlands,  from  our shores to our fields, from mountain fastness to plunging crevasse – they are there. Present, too, in our daily comings and goings, the Tikbalang is perhaps, taking stock of the folly of that entity who, sorrowfully, has remained quiescent in his development. And to Man’s aid has the Tikbalang come : heroic deeds are the stuff of his history. Now, it is with sufficient certitude that we venture to say that while he is able to transcend his human nature, he is equally not immune to its profane inclinations. The human substance in the Tikbalang asserts its potency in his love of gold and in his delight in a good prank. Is not the Tikbalang, therefore,  the perfect embodiment, the actual representation of the primeval struggle of good and evil – the validation that what is intrinsically pure and natural should be paramount to the quintessentially concupiscent. Hence, in its very form and appearance, the Tikbalang is the Horse, lord over the Man.

Myriad are the tales woven about the Magic of the Tikbalang. But what is this Magic? The ability of the Tikbalang to change  his shape when he so desires, is most probably a gift forfeited by Man and consigned to him.  Man, hopelessly shackled to the mundane and therefore unable to rise to the higher plane of a sublime nature, is not only incapable of change but is content to bewail his imperfections. The Tikbalang is wisely invisible to Men who see but would be blind to unseen reality. It is said that being possessed of an amulet, the Tikbalang has great powers. And yet, the Tikbalang is himself the “talisman”. The guardian of flora and fauna, custodian of all as yet unspoiled by Man, he derives his strength from the river of life that feeds creation, the force that spawns the progeny of tree and stallion, fish and bird, bee and blossom. In truth, the domain of the Tikbalang is the very one that Man is supposed to protect. Man’s abdication of this responsibility has given impetus to the ascendancy of the Tikbalang. No wonder, then, that Man has by reason of his deleterious nature, sought ways of subjugating him. The Man who masters the Tikbalang will have him for a servant. There is , however, no record to date of such a relationship between Man and Tikbalang ever having come to pass. The taming of the Tikbalang is just as improbable as the taming of Man.

In this body of work, Jill Arwen Posadas releases the Tikbalang from his one-dimensional depiction in Philippine tradition. Horselords is her tenth solo show but certainly not her first in a lifelong tribute to those of the kingdom of the elementals, specifically the Tikbalang, and the monster cum man. A graduate of the University of the Philippines College of Fine Arts well as of the University of Asia and the Pacific, Jill Arwen Posadas  has almost always used her eye and her palette to bring to fore truths worldly and other-worldly, real and surreal. Long a member of Ang InK (Ilustrador ng Kabataan) she has enabled the incredulous to peer through  her lens and discover that prism of colour reflected in a butterfly wing or on a shell on a mermaid’s tail. Her brushwork is an intimate undertaking that delineates the blast of smoky breath from  a nostril flared, the unfurling of every strand of mane and tail. In this portraiture of  Horse as Man/ Man as Horse, has she had to stalk her subject in his habitat or has the Tikbalang actually sat for Jill Arwen Posadas?

I just have some shout-outs; first of all to mom, who wrote my exhibit text for me ^^; (what I made hardly does it justice ^^; )

And first first of all, to God. Dear Mama Mary, my Guardian Angel, patron saints of artists and writers Saint Luke, Blessed Fra Angelico, Saint Francis de Sales, Saint Charles Borromeo, Saint Catherine of Bologna and Saint Ephrem, patron saint of workers Saint Joseph, Saint Maria Goretti, Saint Dominic Savio, to Saint Thomas Aquinas for reminding me why I do what I do, Saint Lawrence and Saint Benedict and patron saints of impossible things Saint Jude, Saint Rita and Saint Philomena. You Guys have never, ever let me down, and here's me totally undeserving. Thank You.

And on earth (lol) to mom again, and my dad. My sister for making that there video up there and her expert opinions, my brother Hopa for all of -his- expert opinions, for coming with me to CCP, twice, and for all his help, my brother Jones for all the heavy lifting (and for posing for me), and to everyone at home for their moral support (to my niece Sofie for -her- expert opinions and to my other niece Madie for not messing up my workspace).

To Mr Raul Sunico and to Father Suelo ~

To the fine manufacturers of caffeinated drinks and liquid food ~

And to everyone who's ever encouraged me to just keep on trucking, even when the tyres get hopelessly mired in the muck and there ain't no sling or snowchains ~ guess this ol' nag ain't done yet ^^; Thank y'all ^^;  So much ^^;

If y'all wanna snag a few previews they're up on http://jill-arwen-posadas.weebly.com/
Posted by Jill Arwen Posadas at 04:15 1 comment: