Take Me To The Fair 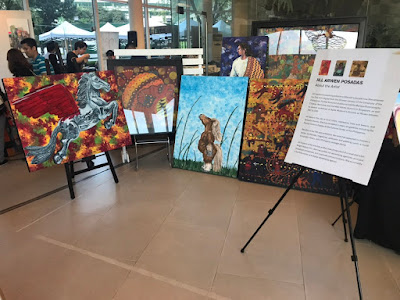 My brother has arranged for some of my work to be included in an art fair this weekend organised by his brother-in-law. He came to the house this past week to root around in my 'archives' and pulled some random pieces out (along with the sort of write-up about me from my show last year): 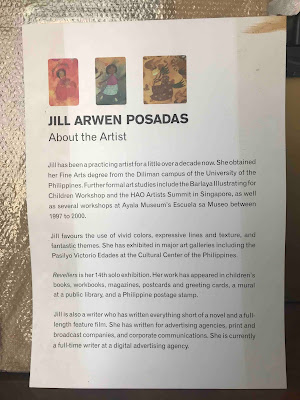 (Kinda banged up and worse for wear; I'm amazed they didn't throw it out.)

Anyway. Here are some notes about the pieces above. 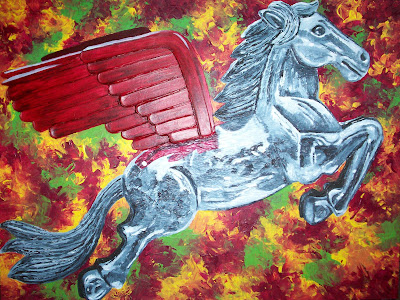 So this is 'Flying Sarao' from my 2011 show, 'Horseplay', and he's done up in acrylic (with more than my usual amount of moulding paste) on canvas. It's actually a hood ornament used on jeeps; I haven't seen any out in the street for quite a while (then again I don't get out much ^^; ). 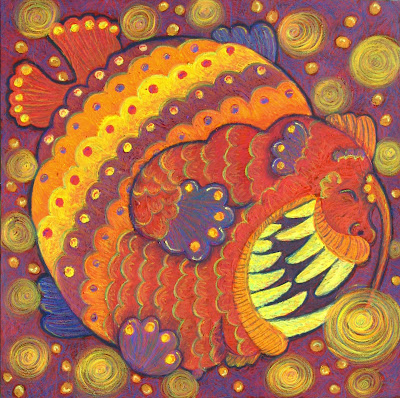 This is "Big Fish' and he's actually meant to be hung together with 'Small Fry' to end up looking like this: 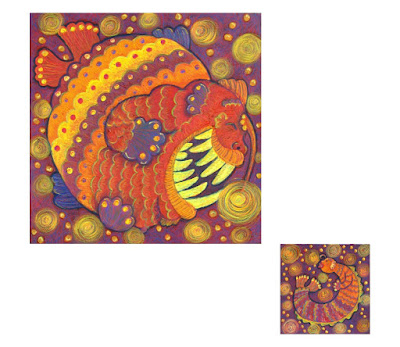 I remember it kind of bothered one or two people at the exhibit they appeared in at the time (I made these quite a while back; 2006, I think), but I also remember I had a lot of fun making them. They're done up in acrylic and oil pastel on paper (canvas paper? I forget). (Honestly, I should keep better notes x records of these things; I have tried, though.) 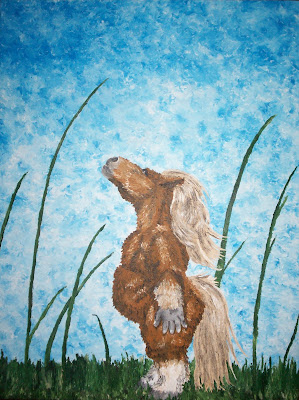 This is 'Khazad' from my 2013 show, 'Horselords'—he's a tikbalang made out of a Shetland pony and a person of short stature ('khazad' is Khuzdul (Dwarfish) for 'dwarf') and he's done up in acrylic on canvas.

This was a challenge for me because I had to establish scale; looking back I'm not sure whether the tall grass I added succeeded in doing that, but see I didn't want him to be standing in a field of tall grass and I wanted him to see the sky (better), although why would there be bits of tall grass in a field of grass-grass (so fail! on my part there) (among other things).

Having figured out recently that I am / my actual image is a Shetland pony after all (however much I'd like to be / my self-image is of an Arabian ^0^), seeing this again after being taken out of storage has a little more significance for me. 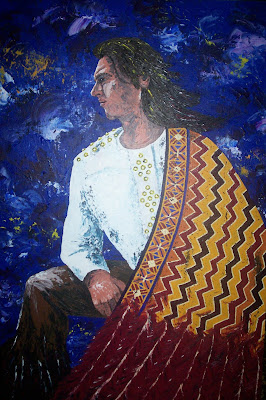 This is Makintana—he's an engkanto whose job, if I remember correctly, was to keep an eye on the real x human world, and in doing this he usually transforms into a bird (and boy did that work out well for him (lol), depending on how you look at it ^^). (You see, he met his human wife that way.) He's acrylic on canvas and he's part of a collection I made some ten years ago illustrating that (incredibly cheesy and deliberately derivative) story a friend and I made up. 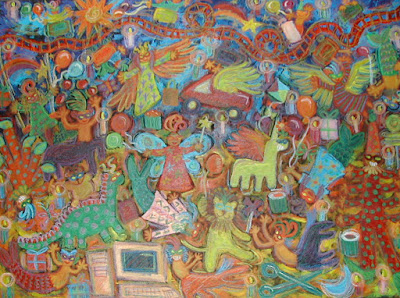 This is '28 Candles' (Yes, there are actually 28 of them if you care to count, haha). See when I turned 28 I didn't have any money to do anything about it, so I took some canvas I had lying around, built myself a frame (badly, I admit—the frame twisted when I stretched the canvas over it), used whatever I had lying around (acrylic and oil pastel), and painted whatever I wished I had money to do on my birthday hahahahahahahha.

I vaguely remember not finishing this on my birthday itself (I think it took a few days? Mraow, I forget). Mom took this painting and hung it on the ceiling over our dining table, but we took it down to have it framed and because of the oil pastel, it had to be framed under glass so it became too heavy for the ceiling (and since our dining table has a glass top...). I'm glad I had it framed, though. It's a very personal painting for me.

You know my dad actually thinks I didn't 'paint' it (he thinks I 'just drew' it)? I remember him saying 'there is no paint in that picture / that picture was not painted'. I did though, Dad, honest—I painted it first and then I put the oil pastel on top of it ^o^; 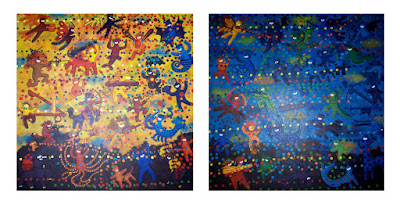 Finally, there's half of a diptych called 'Paintball' which I did in acrylic on canvas in 2010, and which I remember my mom didn't like because she said it was violent. Honest, though, Mom, they're just playing x it's only paintball and not actual guns or anything. It's nice to see different species having fun together x it was all in good fun and nobody meant anything anyway (hopefully). Both sides were evenly matched so they ended up playing all day until night fell. I don't think anybody really 'won' ^^

Anyway I'd like to say thank you to my brother (and his brother-in-law) for thinking of me x having me at this art fair—wish I could've gone again to Capitol Commons (in Ortigas) this afternoon. I saw a couple of paintings there that I liked very much when I went yesterday, and I was particularly pleased to run into an artist who used to work at the gallery I had my show at two years ago, but who's now been doing very well since taking that great leap of faith (not entirely by choice, he admits) to do art full time. I have to say I really rather envy him, and the thought had crossed my mind in the past couple of days to do the same thing.

In any case all this 'reminiscing' can't entirely be a 'good' thing—with heartfelt thanks to God, Mama Mary, my Guardian Angel (it is their month this month after all!) and Saint Dymphna and to the support and encouragement of my Mom, my sister, Mr H, Daylin, Rhea and Christie, I'm slowly getting back on my feet and back into the game. So hopefully I'll have something new to post here soon instead of flashbacks, lol.

And even if I don't take the plunge (yet), I'm hoping to, you know. Make up for all the lost time. I realise now that I wasn't resting (indeed, I've had no real rest at all) (well, you know what they say, 'No rest for the wicked')—I was just lazy.

Posted by Jill Arwen Posadas at 19:57